There’s Nothing Trivial about the Danube Delta

This is part of an article published by Jen Holzer, PhD student in the Technion Socio-Ecological Research Group in Haifa, Israel, affiliated with the Israeli LTSER network, after her trip to Romania which was funded by an eLTER Transnational Access research exchange grant.

There’s Nothing Trivial about the Danube Delta

Tulcea, Gateway to the Danube Delta

On our first morning in Bucharest, Romania’s capital, Dr. Mihai Adamescu met us (my advisor, Dr. Daniel Orenstein, and myself), and together we walked 10 minutes north, past the Palace of the Parliament, said to be the largest building in Europe and the third-largest in the world, to the Faculty of Biology of Bucharest University, which has programs in biology, biochemistry, and ecology.

After a tour, we drank tea up a steep, narrow staircase in the Systems Ecology faculty – the office of our esteemed hosts, Mihai and his colleague Constantin – and without further ado, we departed on a 4-hour drive to the resort town of Tulcea, gateway to the Danube Delta.

We drove through vast flatland monocultures – sunflowers, corn, and wheat – and then on to solar fields boasting the latest model of German-made wind turbines. Romania currently gets 25% of its energy mix from renewables. The electric wires slumped what looked to be dangerously low across the fields. Finally, after two pit stops, we crossed a bridge straddling the murky Danube, of mythic proportions and Hulk-green.

On our first day in Tulcea, we boarded a medium-sized motorboat fit for 8 people, and our boatman, Jeru, drove out into the Danube Delta. We took the river downstream, then several canals, two large lakes, and back home, for a full 8-hour tour, including a 2-hour stop in Criştan, the home village of our boatman, for a traditional lunch of fish stew, called chorba.

Our host ecologists took us to the a reflooding project, where the marshland had been drained for agriculture, and then, in a long-fought-for change of policy, was reflooded, about a year ago, to restore the wetlands. A team of horses and a herd of cows roamed the area, marked by man-made dikes, and dotted with native flowers. 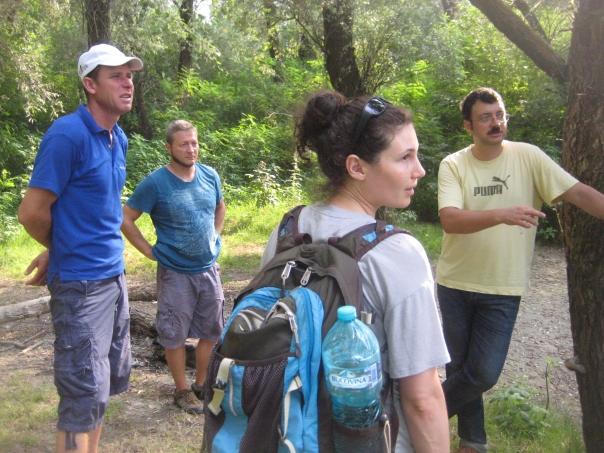 They also pointed out the abundance of endemic biodiversity, despite it “not being birding season”. So many birds I had never seen before! Little egret, great egret, the invasive shore plant amorpha fructosa. Great white heron, little tern, black tern, common tern. Juvenile and adult cormorants. Black ibis, geese, swans. A lonely white pelican. A rare Dalmatian pelican. A domesticated pig, a wild boar. An otter. When we stepped onshore, tiny frogs sprang out of the mud in abundance.

We inaugurated our interviews that day with the impromptu questioning of our boat captain, native to the small village of Criştan, accessible only by boat. He shared a dominant view of many locals, who saw the Biosphere Reserve designation as a barrier to poor fishermen like himself, who needed as much catch as they could get. While we were there, our phones picked up the Ukrainian phone network, reminding us of the transboundary nature of the Danube Delta.

Our interviews in Tulcea were done. The next morning we would set out toward the City of Braila, adjacent to the Small Island of Braila, a 15,000 hectare nature reserve dedicated to protecting the natural floodplains and wetland habitat characteristic of the Lower Danube area, another important bird migration corridor between Europe and Africa.

We use cookies on our website to give you the most relevant experience by remembering your preferences and repeat visits. By clicking “Accept All”, you consent to the use of ALL the cookies. However, you may visit "Cookie Settings" to provide a controlled consent.
Cookie SettingsAccept All
Manage consent

This website uses cookies to improve your experience while you navigate through the website. Out of these, the cookies that are categorized as necessary are stored on your browser as they are essential for the working of basic functionalities of the website. We also use third-party cookies that help us analyze and understand how you use this website. These cookies will be stored in your browser only with your consent. You also have the option to opt-out of these cookies. But opting out of some of these cookies may affect your browsing experience.
Necessary Always Enabled
Necessary cookies are absolutely essential for the website to function properly. These cookies ensure basic functionalities and security features of the website, anonymously.
Functional
Functional cookies help to perform certain functionalities like sharing the content of the website on social media platforms, collect feedbacks, and other third-party features.
Performance
Performance cookies are used to understand and analyze the key performance indexes of the website which helps in delivering a better user experience for the visitors.
Analytics
Analytical cookies are used to understand how visitors interact with the website. These cookies help provide information on metrics the number of visitors, bounce rate, traffic source, etc.
Advertisement
Advertisement cookies are used to provide visitors with relevant ads and marketing campaigns. These cookies track visitors across websites and collect information to provide customized ads.
Others
Other uncategorized cookies are those that are being analyzed and have not been classified into a category as yet.
SAVE & ACCEPT